Hot of the Press December 2021 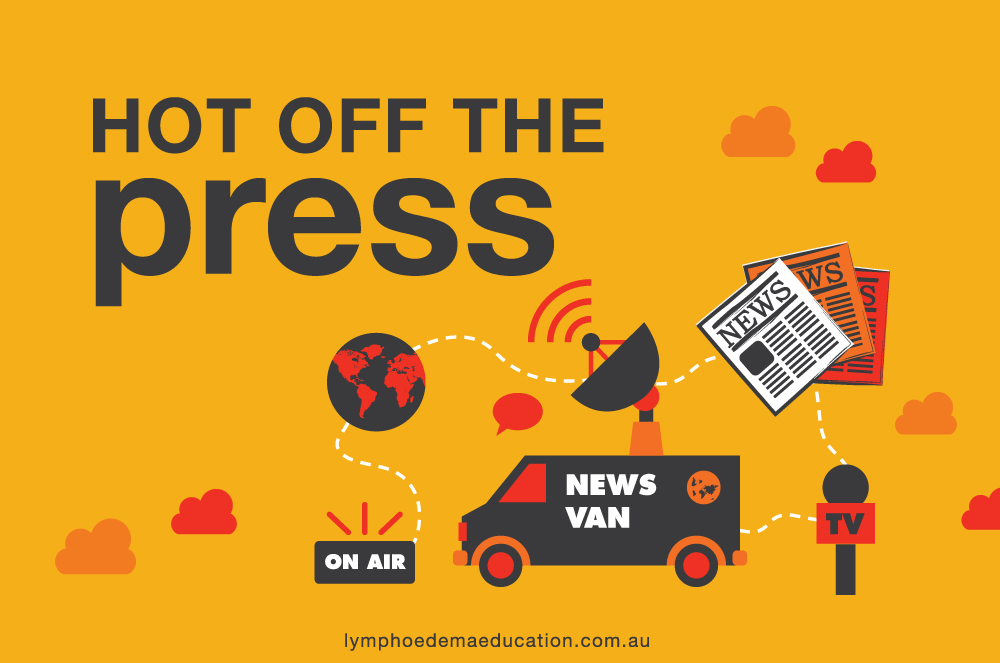 We have collated some great articles and material published over the last month. Click on the links below to read the  abstract or download the full paper.

Kotaro Suehiro, Yukie Mizumoto, Noriyasu Morikage, Takasuke Harada, Makoto Samura, Takashi Nagase, Yuriko Takeuchi, Takahiro Mizoguchi, Ryo Suzuki, Hiroshi Kurazumi, Kimikazu Hamano. Lymphat Res Biol. 2021 Nov 16.
We aimed to clarify whether pathological changes in skin and subcutaneous tissue with lymphedema affected the skin hardness sensed by palpation. Methods and Results: In 50 patients with unilateral legs with lymphedema (LE), the skin hardness of the lower inner thigh and lower inner calf was determined using a scale ranging from 1 (softest) to 7 (hardest) based on palpation. Then, the skin hardness was correlated with the measurements of skin/subcutaneous tissue ultrasonography images obtained from the palpated parts. Multivariate logistic regression analysis demonstrated that dermal thickness was a significant factor that affected the difference in skin hardness between the LE and the contralateral asymptomatic leg for both thigh (p < 0.05) and calf (p < 0.01). When the thigh and calf in the LE were individually studied, subcutaneous echogenicity (p < 0.05), indicating subcutaneous inflammation/fibrosis, and subcutaneous thickness (p < 0.01) also seemed to affect skin hardness, respectively. Conclusions: The skin hardness sensed in the LE seemed to be affected predominantly by dermal thickening. In addition, the pathological changes in the subcutaneous tissue caused by LE seemed to have an impact on skin hardness.

Lymphedema and Sports: A Case Series of Athletic Patients - click for abstract

Lymphedema and Sports: A Case Series of Athletic Patients

Christopher L Sudduth, Arin K Greene. Lymphat Res Biol. 2021 Nov 25.
Lymphedema is a chronic progressive condition without a cure. Although the disease can cause significant morbidity, it is not a contraindication to participating in sports. The purpose of this study was to illustrate patients who are able to perform vigorous athletic activities to encourage individuals newly diagnosed with lymphedema. Methods and Results: Our Lymphedema Program database was reviewed for patients who performed significant sports, outside of routine exercise and fitness. Inclusion criteria were a confirmed diagnosis of lymphedema, age >16 years, and body mass index (BMI) <30. Age, gender, type of lymphedema (i.e., primary or secondary), location of disease, BMI, and athletic activities were recorded. Fourteen patients met inclusion criteria: seven males and seven females. Average age was 34 years (range 17-77) and lymphedema was primary (n = 11) or secondary (n = 3). All subjects had lower extremity disease: right leg (n = 6), left leg (n = 5), bilateral (n = 3). The average BMI was 23 (range 18-27). Sports performed by the cohort included marathon running (n = 3), soccer team (n = 2), skiing (n = 2), basketball team, rugby, swimming team, college lacrosse team, hockey team, college tennis team, and surfing. Conclusions: Patients with lower extremity lymphedema are able to engage in competitive sports and a wide range of athletic activities. Individuals typically have a normal BMI and active lifestyle. Patients with lymphedema should be encouraged to participate in athletic pursuits that they enjoy and to maintain a normal BMI.

In patients with lymphedema (LE), in addition to hand dominance, between-group comparisons of interlimb soft tissue differences need to account for differences in whole-body adiposity, measured directly by dual energy X-ray absorptiometry (DXA) or indirectly by body mass index. No study has evaluated the effects of hand dominance and whole-body adiposity on limb composition in patients with LE. This study’s purpose was to compare soft tissue composition of affected and unaffected limbs of women with breast cancer, who did and did not have LE, controlling for dominance and percent body fat.

Methods and Results: Whole-body DXA scans were acquired and included measures of percent body fat, upper limb total mass, upper limb fat mass, and upper limb fat-free mass. Participants were classified into one of three groups: women without LE; women with only subjective LE; and women with objective signs of LE at the time of assessment. Differences among the LE groups were evaluated using analysis of variance (ANOVA) and Chi-square analyses. Analysis of covariance (ANCOVA) was used to control for percent body fat and for the affected limb dominance. Compared to women without LE, women with objective signs of LE have greater total limb mass, fat mass, and fat-free mass in their affected limbs, independent of affected side dominance and percent body fat. In addition, the interlimb differences in total mass, fat mass, and fat-free mass were greater for the women with objective signs of LE, compared to the other two groups.

Conclusions: DXA is useful in identifying soft tissue changes in patients with LE. Given that limb circumferences measure only changes in limb volume and that bioimpedance provides estimates of extracellular fluid, DXA has the advantage of being able to estimate the volumes of specific tissues in the limb.

Melanie J. Thomas, Marie E. Gabe-Walters, Elizabeth Coveney. Nurs Child Young People. 2021 Aug 9.
BACKGROUND: Lymphoedema is a chronic condition that requires lifelong, time-consuming and laborious management. It can have significant effects on physical, psychological and social well-being. Children and young people with lymphoedema require access to expert services to aid early diagnosis and referral for assessment and treatment.
AIM: To explore the perspectives of children and young people living with lymphoedema and those of their families, as well as their experiences of the national paediatric lymphoedema service in Wales.
METHOD: A qualitative approach was adopted using semi-structured interviews with participants who had been referred to the national paediatric lymphoedema service in Wales.
FINDINGS: A total of 15 families were interviewed. Five themes were identified: lack of professional awareness of paediatric lymphoedema; a journey to diagnosis as lost in the system; ‘being me’ – what it feels like to have lymphoedema; managing lymphoedema and feeling supported; and the benefits of a national paediatric lymphoedema service. Two sub-themes were identified within the ‘being me’ theme – body image and self-esteem, and loss of control.
CONCLUSION: Lymphoedema has a profound effect on daily life, body image and self-esteem. Participants tended to be resilient and determined to continue with their lives. Importantly, they valued being under the care of a service that understood their condition

Ultrasound for the Objective Measurement of Breast Lymphedema - click for abstract

Ultrasound for the Objective Measurement of Breast Lymphedema

Colleen B Kerrigan, Thomas P Ahern, Sara K Brennan, Kathryn C Kurchena, Carl J Nelson, Michelle M Sowden
J Ultrasound Med. 2021 Nov 18.
OBJECTIVES: Breast lymphedema has supplanted upper extremity lymphedema as a common and debilitating sequela of breast cancer treatment, but has no objective measurement. We assessed the utility of ultrasound-measured difference in dermal thickness between affected and unaffected breasts as a measure of breast lymphedema. We associated this measure with patient characteristics, treatment parameters, and patient-reported impact on quality of life.
METHODS: We enrolled 30 invasive breast carcinoma patients treated with breast-conserving surgery, sentinel lymph node biopsy, and radiotherapy, and 10 control patients evaluated for benign breast conditions without prior breast surgery or radiotherapy. Patient and treatment variables were ascertained from medical records and radiotherapy instruments. Impacts on quality of life were measured with a modified Disability of the Arm, Shoulder, and Hand questionnaire. We characterized breast lymphedema by calculating the difference in ultrasound-measured dermal thickness between affected and unaffected breasts. Associations with patient characteristics, treatment, and quality of life were quantified with log-binomial regression models.
RESULTS: Breast lymphedema was defined as a dermal thickness difference of >0.3 mm. Nineteen patients in the invasive group (63%) had breast lymphedema by this definition. We observed positive associations between ultrasound-defined breast lymphedema and surgical factors (size of primary tumor, number of lymph nodes removed), radiotherapy factors (breast volume irradiated, receipt of radiation boost), and patient-reported outcomes (sleep quality and overall confidence).CONCLUSIONS: Difference in dermal thickness is an easy and inexpensive measurement for quantifying breast lymphedema, and correlates with treatment parameters and patient-reported impacts on quality of life.

Melanie J. Thomas, Karen Morgan, Paula Lawrence. Br J Community Nurs. 2021 Oct 1;26(Sup10):S16-S21.
Reticence to apply compression therapy has been widely observed in clinical practice, compounded by an absence of evidenced-based pathways for application of prompt compression prior to measuring ankle brachial pressure index (ABPI). Importantly, delaying compression therapy for patients with chronic oedema and lymphorrhoea causes many avoidable complications. In 2017, Lymphoedema Network Wales (LNW) developed an evidenced-based pathway to improve the management of chronic oedema and wet legs (lymphorrhoea) for community nurses. During the past 4 years, the Chronic Oedema Wet Leg Pathway has been presented, published and used internationally, as well as being translated into different languages. It is commonly used in community nursing Teams as an evidenced-based document. However, like all documents and guidelines, when more evidence becomes available, the pathway needs updating. Therefore, this clinical focus article will present the new and enhanced Chronic Oedema Wet Leg Pathway, introducing a new level four compression section, which increases the layers of compression bandaging for patients with venous insufficiency or who are morbidly obese.

Hayder Al Saffar. Lymphat Res Biol. 2021 Nov 16
Lymphedema is a progressive disorder characterized by impairment of lymph flow from tissues to the blood circulation due to damage of lymphatics. Treatment can be surgical or nonsurgical. A great number of operative procedures described in the literature demonstrate no single method exists that could be regarded as a standard. Nonsurgical therapy consists of a set of four physiotherapeutic measures, if properly performed; it treats the cause of lymphedema in a manner free of side effects, this set is called complex physical therapy (CPT). Criteria and facilities of CPT are not available in Iraq now. Materials and Methods and Results: Below is a short clinical experience of seven cases (nine diseased lower limbs) presented at our clinic for management of lymphedema who were all managed successfully during the decongestive period using adjustable Velcro wraps (AVW). Conclusions: In the absence of ideal CPT facilities, AVW can be used as a single therapeutic modality for treatment of lymphedema.

Genital Lymphedema and How to Deal with It: Pearls and Pitfalls from over 38 Years of Experience with Unusual Lymphatic System Impairment