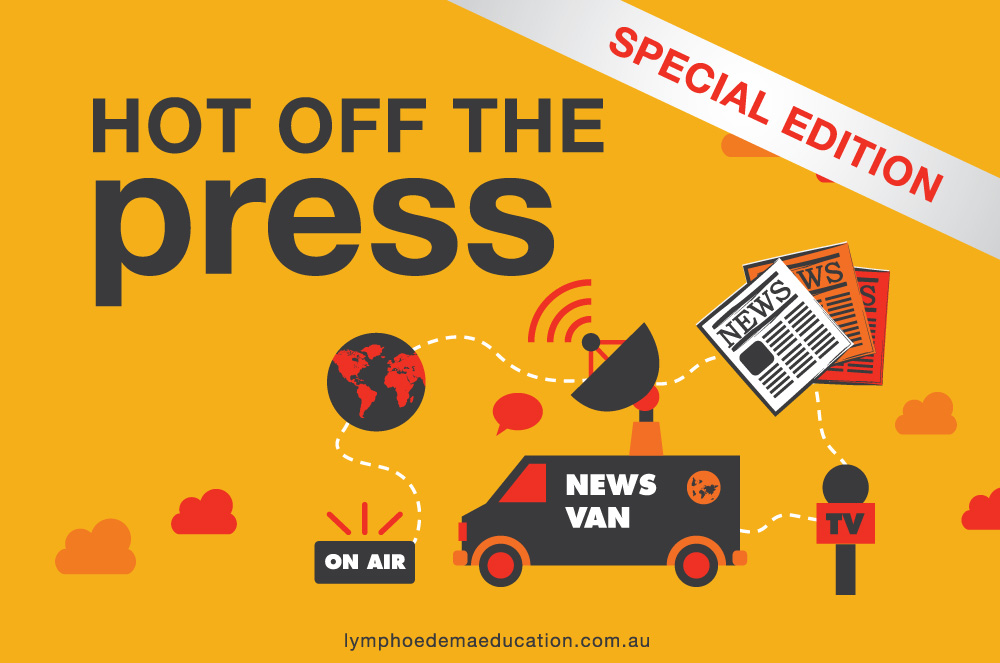 We have collated some great articles and material published over the last month. Click on the links below to read the abstracts and full articles.

Obesity is a risk factor for the development of secondary lymphedema after axillary lymphadenectomy and radiation. The purpose of the study was to determine if obesity influences the morbidity of lymphedema in patients who have the condition.

Obesity negatively affects patients with established lymphedema. Obese individuals are more likely to have infections, hospitalizations, and larger extremities compared to subjects with a normal BMI. Patients with lymphedema should be counselled about the negative effects of obesity on their condition.

This study aimed to develop and evaluate 2 prototype dashboards for displaying data on the identification and management of lymphedema.

The study used a co-design framework to develop 2 prototype dashboards for use by health professionals delivering breast cancer care. The key feature of these dashboards was an approach for visualizing lymphedema patient cohort and individual patient data. This project began with 2 focus group sessions conducted with members of a breast cancer multidisciplinary team (n=33) and a breast cancer consumer (n=1) to establish clinically relevant and appropriate data for presentation and the visualization requirements for a dashboard. A series of fortnightly meetings over 6 months with an Advisory Committee (n=10) occurred to inform and refine the development of a static mock-up dashboard. This mock-up was then presented to representatives of the multidisciplinary team (n=3) to get preliminary feedback about the design and use of such dashboards. Feedback from these presentations was reviewed and used to inform the development of the interactive prototypes. A structured evaluation was conducted on the prototypes, using Think Aloud Protocol and semistructured interviews with representatives of the multidisciplinary team (n=5).

Lymphedema was selected as a clinically relevant area for the prototype dashboards. A qualitative evaluation is reported for 5 health professionals. These participants were selected from 3 specialties: surgery (n=1), radiation oncology (n=2), and occupational therapy (n=2). Participants were able to complete the majority of tasks on the dashboard. Semistructured interview themes were categorized into engagement or enthusiasm for the dashboard, user experience, and data quality and completeness.

Findings from this study constitute the first report of a co-design process for creating a lymphedema dashboard for breast cancer health professionals. Health professionals are interested in the use of data visualization tools to make routinely collected clinical data more accessible. To be used effectively, dashboards need to be reliable and sourced from accurate and comprehensive data sets. While the co-design process used to develop the visualization tool proved effective for designing an individual patient dashboard, the complexity and accessibility of the data required for a cohort dashboard remained a challenge.

Avoiding the Swell: Advances in Lymphedema Prevention, Detection, and Management

Existing literature which is changing practice should be scrutinised, in the interest of all women at risk for lymphoedema after breast cancer (BC). Bundred et al.’s prospective, multicentre trial of 1100 women made several solid findings, and novel screening recommendations presented may assist in incorporating lymphoedema screening into standard of care

Secondary lymphedema is a debilitating complication of breast cancer therapy and affects more than 1 in 5 breast cancer survivors. Patient-reported outcomes may be more important in predicting long-term health-related quality of life (HRQoL) than clinician-measured outcomes.

A literature search of PubMed/MEDLINE and Embase was conducted to identify articles on HRQoL in patients undergoing lymphedema treatment with CDT or VLNT published from January 1980 through April 2019. Studies using validated measurement instruments to assess HRQoL in patients with breast cancer-related lymphedema relative to baseline were included. This review is reported according to the PRISMA guidelines.

According to this review, in deciding among breast cancer-related lymphedema treatment modalities, HRQoL outcomes are an important consideration that cannot be compared based on currently available data. Health-related quality-of-life outcomes obtained through coordinated use of preference-based health utility measures may be required to compare outcomes among patients undergoing surgical and nonsurgical treatments of breast cancer-related lymphedema. Additional studies are needed to better understand the best lymphedema treatment options and direct evidence-based care.

A systematic review of the quality of clinical practice guidelines for lymphedema, as assessed by the AGREE II instrument

A systematic review of the quality of clinical practice guidelines for lymphedema, as assessed by the AGREE II instrument

CREST had the highest overall score (66.8%), as an average of all domains, while J LED had the lowest (37%). CREST also had five out of five domains rated above 50%, while J LED had only one and AVF two domains scored above 50%. Although the two domains, Rigor of Development and Applicability, were scored low with only one guideline rating greater than 50%, Editorial Independence scored the lowest of all six domains.

Microsurgical Strategies for Prophylaxis of Cancer-Related Extremity Lymphedema: A Comprehensive Review of the Literature

Microsurgical Strategies for Prophylaxis of Cancer-Related Extremity Lymphedema: A Comprehensive Review of the Literature

Cancer-related lymphedema represents the first cause of noninfectious secondary extremity lymphedema. This entity is a progressive and debilitating disease with no curative treatment available. With the advent of lymphedema microsurgery, focus has turned into risk reduction and prevention of the disease progression.

This review provides a comprehensive overview of the literature regarding microsurgical interventions for the prevention of cancer-related extremity lymphedema. There are several methods for lymphedema prophylaxis and further studies are required to clarify indication of each method.